I was at the shopping mall today, buying a birthday present for my son, and having my laptop resuscitated. I happened to mention to the young man (they’re all young to me…) who was attending to me that I was working on a thesis, and he asked me what it was about. I said “a theory of the voice in performance”, expecting the customary response of “wow! how interesting”, followed by a glazed expression behind the eyes and a rapid retreat. “Wow!” he said, “how interesting.” But instead of glazing and retreating, he asked: “You mean the tone, the pitch of the voice?” “No,” I replied. “We know about the tone and the pitch, the emphasis, the pace, the speech tune. But when an actor performs a text, there’s something else that the voice can do that isn’t explained by those things.”

He asked me what I meant, so I explained how an actor is required to sound authentic and engaging every time he repeats a text, and although he might be able to repeat the same tone, pitch, emphasis, pace and tune each time, unless the ‘something else’ that I am attempting to theorize is present, he will not sound either authentic or engaging.

The young man was not only interested, but understood what I was talking about, so I asked him if he were an actor. He said no, but gradually admitted that years ago he had thought of applying to NIDA, but it didn’t happen, and now – at the age of thirty – it was too late.

Well!  As you can imagine, I gave him The Talk, insisting that it was never Too Late, that Theatre was too important to be left up to people who just wanted to be famous, and it was the duty of people (such as himself) who were passionate about live performance to get involved.  Acting academies such as NIDA like to take in a couple of ‘mature’ students each year, it enhances the mixture and gives them more options when they are casting the student productions they need to put before the public to help justify their funding.

Acting is about talent, but it is also about training and commitment. A good actor understands that acting is a process, not a goal, and training is an essential, on-going part of the process.

I don’t believe it’s ever too late to start working on something new. Of course, at different stages of our lives we have different challenges. But some things never change. It is always scary to step out into the unknown. Most of us assume that everyone else is ‘better’ or ‘wiser’ or ‘prettier’ or ‘more talented’ than we are. Learning that such assumptions are not just unhelpful, they are actually entirely irrelevant is one of the greatest lessons we can ever learn. 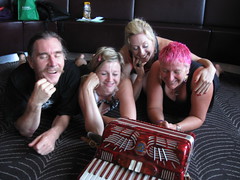 Training means changing. Since we are constantly changing, as long as we are alive, why not take advantage of it, and change in a direction that gives us satisfaction?  I am looking forward to undertaking some training myself in January, for three weeks, in Ira Seidenstein’s Quantum Clown Residency.  I know I will have to pace myself, that I can’t expect to keep up physically with what the younger participants will be able to accomplish, but by golly I will be challenging myself to change more than a few electrons and particles of fun!

(photo: A Selection of Quantum Clowns)